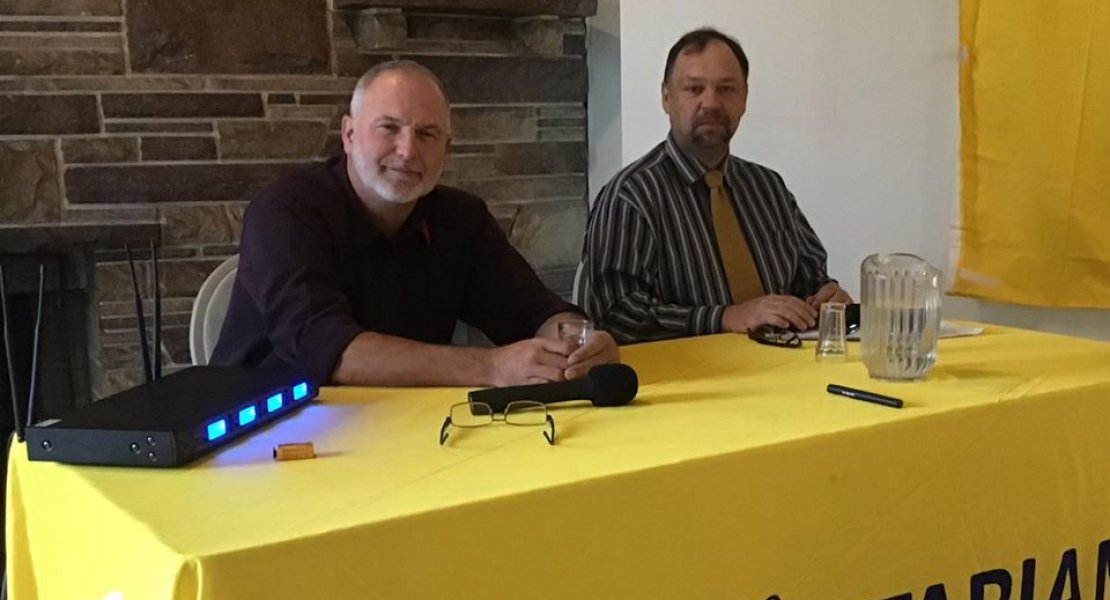 The Convention opened with a meet and greet and buffet breakfast at 830 AM.

Outgoing Chairman Mark Wrzesniewski addressed the delegates and guests, after which he read a farewell address from outgoing Leader Rob Ferguson who was not able to attend.

After the reports from officers, a debate was held between then leadership hopefuls, Keith Komar and Mark Snow. The debate was moderated by the Leadership Race Director Brad Greulich, who used a panel of questions sent by Party members via email and Facebook. The debate was spirited but respectful and the clear winner was everyone in attendance.

Following a lunch of flat iron steak, grilled veggies and roast potatoes, former leader of the Libertarian Party of Canada, Chairman of the Ontario Libertarian Party, author and tax protestor Jean-Serge Brisson spoke to the room about his recent court battle and WIN against the government of Canada and CRA regarding the unpaid collection of GST that they impose upon business owners. (See page 4.)The speech was as informative as it was well presented, and following it JS took a couple of questions from the floor before we began the Party internal elections, results of which are posted on Page 3.

Fol the election of our new Executive Committee and three new members of the Ethics Committee, Delegates voted on some 20 Constitutional Amendments, 7 pages of them! The Membership oath was changed to read, "I am for individual liberty, property rights, free markets and limited government.” Also, “Any Member standing for election to the Executive Committee must have been a Member of the Party for at least 60 days immediately prior to the meeting.”

This closed our convention. It was a good day, held at a new venue which provided us with an improvement in atmosphere, and a notch above when it came to the food and refreshments.

We hope to see you all at the AGM next year!